The major players for the 2022 Royal Ascot Gold Cup 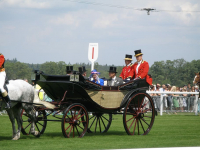 The Gold Cup is one of the landmark races of the Royal Ascot festival. This Group 1 encounter is a 2 mile 3 furlong race that’s designed to showcase the very best stayers in the sport. The Royal Ascot Gold Cup was established in 1807, with the inaugural race staged in the presence of King George III and Queen Charlotte and the eventual winner – Master Jackey – landing a payday worth 100 guineas.

The race has come a long way in the last two centuries, but it’s not lost any of its prestige and grandeur. It’s still the first part of the so-called ‘Stayers’ Triple Crown’ in British flat racing, which also includes the Goodwood Cup and the Doncaster Cup. Stradivarius was the last horse to win the Stayers’ Triple Crown back in 2019. He returns to the Ascot Gold Cup this year, looking to make another bold bid for the Triple Crown.

Stradivarius is available at a best price of 8/1 with William Hill, as of 25th April. This bookmaker is renowned for its free bets for Ascot, which are aimed largely at those who prefer placing their Royal Ascot wagers on mobile devices. Stradivarius would certainly be a sensible choice for any free wager at this year’s Royal Ascot. The John Gosden-trained charge won three Gold Cups back-to-back between 2018 and 2020. With enigmatic jockey Frankie Dettori on board, there’s always a chance of a fourth Gold Cup success.

The other contenders to watch in the 2022 Ascot Gold Cup

Trueshan is likely to be the pre-race favourite for this year’s Ascot Gold Cup. The Alan King-trained stayer was primed for last year’s Ascot Gold Cup, but King took the bitterly frustrating decision to withdraw Trueshan from the race due to the ground. Trueshan has long been a horse that’s thrived having some cut in the ground. Last year’s harder ground meant that King had to pull him out to avoid any unnecessary setbacks.

Trueshan has plenty of previous in Group 1 races, having won the Prix du Cadran as well as the Goodwood Cup – the latter another leg of the Stayers’ Triple Crown. King said recently that he has been “very happy with [Trueshan’s] build up” to this year’s Ascot Gold Cup. He also said that the rain had “come this time” and that race conditions “look set to be fine” for Trueshan to run his race.

Godolphin’s Manobo is another hot prospect for this year’s Ascot Gold Cup. Manobo had a stunning recent victory at Meydan the latest to underline the four-year-old’s class. Jockey William Buick rode him to victory at Meydan and post-race Buick intimated that connections not only had the Ascot Gold Cup in their sights but half an eye on some middle-distance races too. As a big, imposing sort, Manobo is certainly capable of staying the course at Royal Ascot.

A red flag for Manobo backers?

However, Manobo’s most recent run may have sent alarm bells ringing with punters. Having been sent off as the 4/11 favourite in the Group 2 Dubai Gold Cup, Manobo was pipped by Japanese-trained Stay Foolish. Trained by Yoshito Yahagi, Stay Foolish went on to overcome the giant of a horse ridden by French jockey Christophe Lemaire. If Lemaire is selected to ride Stay Foolish at the Ascot Gold Cup, this duo could be another value option for punters. Lemaire insisted that Stay Foolish could “run in any Group 1, anywhere”.

Another value pick for this year’s Ascot Gold Cup could be the Ralph Beckett-trained Scope. The four-year-old has evolved into a classy stayer and in 2021 posted two fine wins in the Noel Murless Stakes at Ascot and the Group 1 Prix Royal-Oak at Longchamp. For those who enjoy using historical race data as a guide to future outcomes, the fact that Scope knows how to win at Ascot is an encouraging sign. He appears to be a very progressive sort, with over £250,000 in career earnings to his name already.

This site is intended for over-18s only. Want gambling help, advice or support? www.BeGambleAware.org.

After a titanic three-way battle for supremacy, Racing Post’s Ratings emerged as top dog in April’s Napchecker race with an impressive ... Read More

On the surface, Glendale’s victory in the March Napchecker race was no big surprise. After all, the Scotsman’s pundit had led the way f... Read More